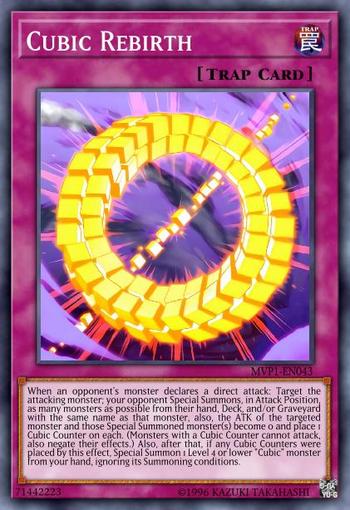 When an opponent's monster declares a direct attack: Target the attacking monster; your opponent Special Summons, in Attack Position, as many monsters as possible from their hand, Deck, and/or Graveyard with the same name as that monster, also, the ATK of the targeted monster and those Special Summoned monster(s) become 0 and place 1 Cubic Counter on each. (Monsters with a Cubic Counter cannot attack, also negate their effects.) Also, after that, if any Cubic Counters were placed by this effect, Special Summon 1 Level 4 or lower "Cubic" monster from your hand, ignoring its Summoning conditions.